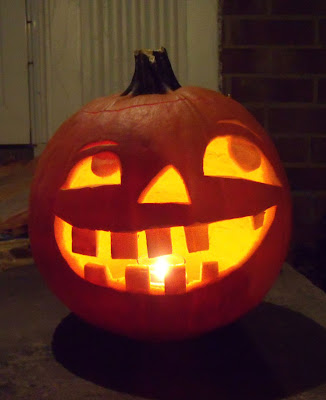 a quick shot of our pumpkin (carved by yours truly)
we had a good halloween weekend. we started of on friday with a trip to mike's office. every year they have a halloween party for all the employees and their families. this was the first time we've attended, and it was a lot of fun. sam was rather impressed and did a lot of commenting on the monkey (person in a gorilla costume) and the rabbit (person in a bugs bunny costume). 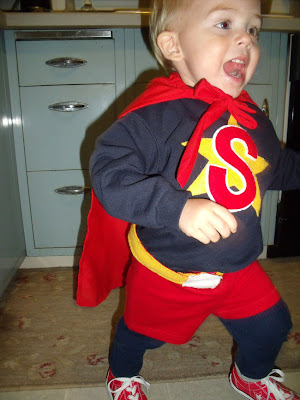 sam running around super fast in his "supersam" costume.
sam had a really good time with trick-or-treating this year, or at least much more so than last year. he seemed to enjoy running around being supersam, but was mostly interested in all the kids that were showing up at our doorstep and walking around the neighborhood in their fancy outfits. 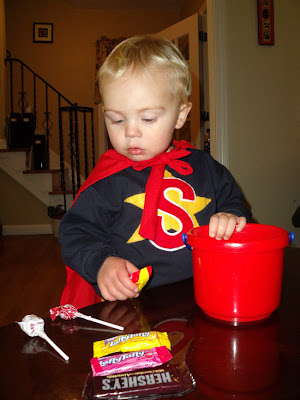 as far as actual trick-or-treating was concerned, he walked himself to all the houses on our street (i guess that turned out to be about five—mike took him while i manned the door). he was pretty interested in his loot (when it was chocolate), and was pretty certain that his tootsie pop was "daddy's candy". in fact, he didn't really get many things he is allowed to eat, but we swapped some of his contraband for a small bag of m&ms and a roll of smarties that he ate with two-fisted gusto. 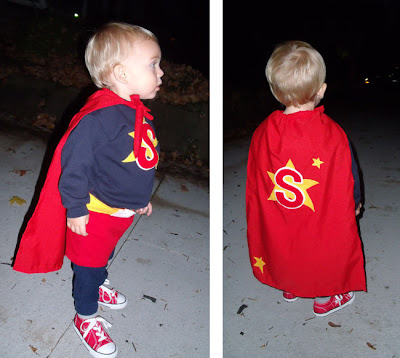 the details of sam's superhero costume—side and back view
in general, i was pretty proud of sam's costume. we had the long-john pants and sweatshirt which came as hand-me-downs ($0), i bought the red shorts on sale at target ($1) and two yards of red fabric ($4.50) from the fabric store, the felt was from my stash, and the biggest purchase was the pair of red converse one-star sneakers ($18) from target (which i had planned on buying anyway, because i just adored the pair his cousin oscar had).
we got several compliments on how cute the costume was, and i have to admit, sam makes a pretty adorable superhero (he's been practicing being super cute for quite a while now).
Posted by --r at 10/31/2010 No comments:

C is for cap 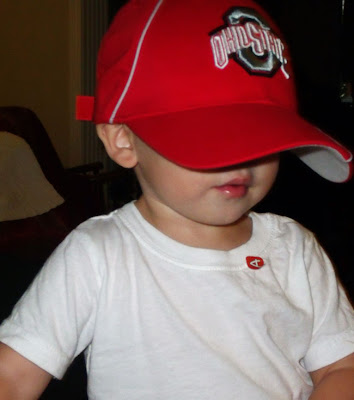 i've been advocating for sam to get a new buckeye hat now that he'll actually wear hats (well, baseball caps anyway—i think that cute winter hat i bought for him is going to take some convincing. we won't mention the matching mittens that cause squeals of terror.) mike and i picked up this red model for sammy when we were in columbus over the weekend. i think he looks rather smashing in it, and he seems to be warming up to it as well—he seemed a little skeptical about something that wasn't his beloved train hat. however, anything buckeyes tends to sell well.
Posted by --r at 10/27/2010 No comments: 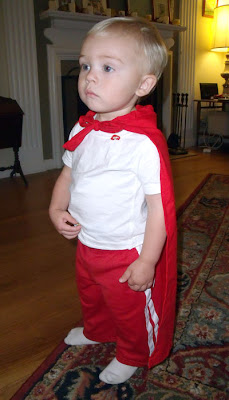 just had to post this photo of sam trying on his supersam cape. at first he liked it better when i wore it and ran around the house pretending i could fly, but as soon as he realized that super why and word girl both wear capes, he was a little more into it.
i've still got finishing touches to add to his costume tonight, but for the most part, it's done.
Posted by --r at 10/27/2010 No comments:

and a few photos to round out this little post-a-thon: 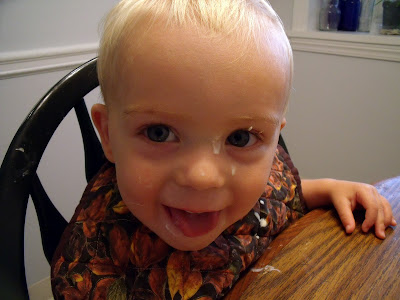 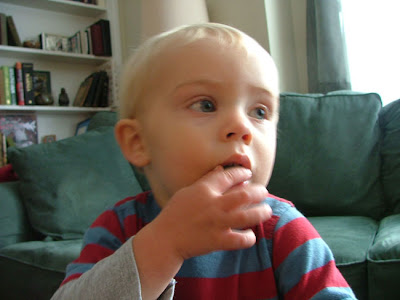 sam enjoying his dried fruit and sesame street. we got him some dried fruit from BJs with apricots, prunes, dried apples, and dried pears. he's a happy camper when he can get some "apple raisins". 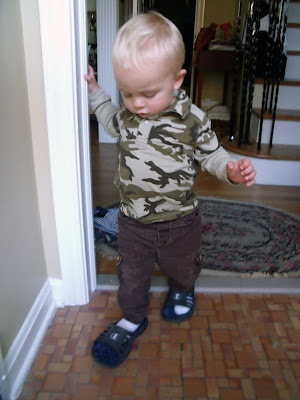 sam walking around in mommy's shoes (he was obsessed with wearing my shoes for a week or so). 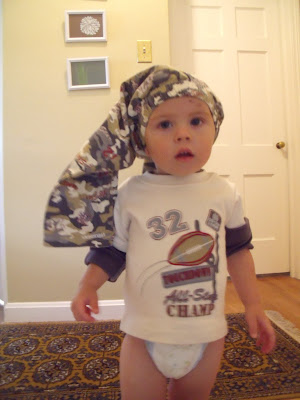 sam wearing his pants on his head (he ran around like this for an awfully long time and was extremely amused with himself)
Posted by --r at 10/19/2010 No comments:

what we've been up to - trip to the metroparks 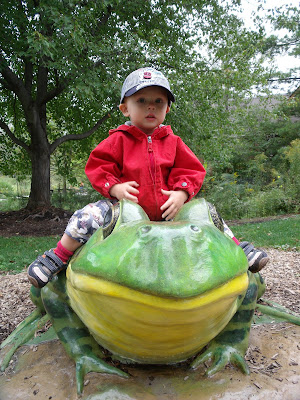 a few weeks ago i had a need to be surrounded by trees, so sam and i packed up a picnic lunch and headed out to the metroparks. we checked out the pond and the nature center, and took a nice long walk along the all-purpose trail. the day started out a bit grey and rainy, but we had a really great time.
sam's favorite parts were riding on the big frogs at the nature center (he had a very hard time leaving them), and watching all the ducks at the pond.
Posted by --r at 10/19/2010 No comments:

what we've been up to - collecting 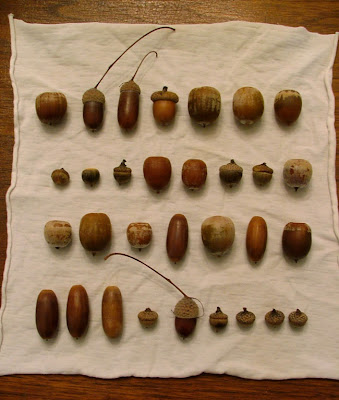 when the acorns started falling, sam was so enthralled with picking them up that i thought it would be fun for him to have a collection. so, every time we go for a walk, we pick up an acorn or two. it's a lot of fun to see all the different kinds that we can find just on our normal romps out and about. so far we've talked about the different sizes that acorns come in, but i think when sam gets a little older, we might look up the different kinds together in the tree guide so we can learn which acorns belong to which trees.
i'm especially fond of finding the acorns with their "hats" still on (and i've glued a bunch of them so that they'll keep their little caps in place.)

what we've been up to - the playground 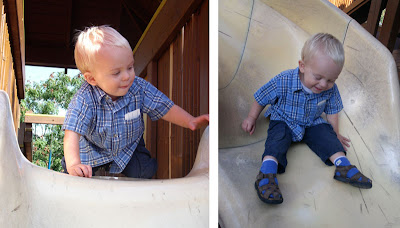 sorry about the lack of blog posts. things have been busy around here lately, and when they weren't, we were just having too much fun to stop and post about it.
sam's been enjoying the playground a lot lately (especially now that he can confidently climb and go down the slide all on his own). he's quite the independent fellow!

other places to spend time